Fantastic game! Lots of replayability, and the misterious scrolls and potions give it some kind of lore...  I found myself trying  to find out what each scroll does and writing it down. Still haven't figured out what the Uruz - Perthu scroll does...

Also love the sound effects, nothing is as satisfying as punching rats.

As for some constructive criticism, sometimes I find it hard to read what text is on the cards, so perhaps you can find a different combinations of colors, but, overall, great game!

SPOILER: If you still don't know what the UP scroll does, try dragging it on one of the player's skills (e.g. health)...

What an absolutely fantastic game. I had so much fun writing down and solving the runes and making a map for my dungeon delving. I feel like one could recreate this game with a pack of cards and die, too, which is really cool. Amazing job, devs!

What exactly does the scroll do?

Hey! Depends on the runes that are written on it. There are spells that can be activated with just a click, and spells that only work by combining them with other types of cards.

Amazing piece in playability, putting together what was best in the tabletop classics - such as Sword and Sorcery - along with the 'fatal' old school roguelike premise, all done in fairly smoothly interactive terms of complete card-based layout, complemented by communicative and pleasant aesthetics. It is also noteworthy that the game is enveloped in colortones suggesting mystery, magic, but also good time. Soundtrack deserves a special recognition, as it is simply consummate.

Thanks for the kind words.

what does hunger do again?

If you're hungry you lose health

and how does fist damage work?

is there any way to disarm the traps?

Hey, there are two spells (magic scrolls) that help with that. First, Disarm Trap removes all traps in the current room. And second, Destroy Card can remove any card you want, including traps.

why would disarming traps be a spell? does our protagonist not understand the concept of dismantling?

Complaining really is the new "thank you" I guess

Yeah this is really cool

It's a mix of Card Thief and Card Crawl and that works really well.

I don't like playing card games, but I like this game because it's not a card game even though it uses cards. Good job!

Wow, what an amazing game. The simplicity of the mechanics make it so enjoyable and easy to pick up, yes the scrolls don't describe what they do, but this adds to the mystery and replay-ability of the game, as it is very short. I found myself getting so involved in discovering and learning every single thing the game has to offer that I used almost a full page of paper writing down the symbols, scribbling down what they do, and making sure I don't miss anything along the way.

Rat King has made a truly fantastic game, and I hope you revisit this idea and expand on it with A LOT more content because there is so much potential in this little gem.

P.S. once I finally found the Amulet and got my score, it gave the hint that there is more than one amulet!!? Is this true?? If so, that is amazing.

Hey, thanks for playing - and the kind words!

There is only one amulet though. ;) It might be that I phrased the end text a bit wrong... In any case, more than one amulet sounds like an idea for a more endless version of the game.

I died in one room because I entered it and a dragon thing and 2 other big creatures where there yeah I couldn't handle that at 22 hp RIP..... welp pretty fun game anyways.

Hey. Really fun Game. I did find a glitch with the spell books tho. One of them i dragged to the one exit and it destroyed it. Now there isn't an exit.

Hey. You've got something good here, I like the overall idea. :)

It's frustrating to not know what the different scrolls and potions do, and often just feels like I'm clicking rather aimlessly hoping they'll do something. I dunno about other people but I always prefer games where the challenge is in using what tools you have to overcome a situation, as opposed to just trying to figure out what stuff does when there's no obvious clue. That just feels frustrating for its own sake, where success often comes down to luck, rather than being a challenge I can think my way around and be rewarded for understanding the mechanics, not guessing them and then having a good memory. For anyone like me without a good memory, those sorts of games often feel like it's impossible to make progress. I don't know if that made sense, I'm not trying to attack you or anything, I just think it could be a lot more enjoyable and less frustrating if there was something telling you what each item does, or at least a hint as to what it's for. I'd say something similar about the 'room effects'. All I know is that the spike trap does damage when you walk into the room, but besides that, I've got no idea what the others do or if it's possible to remove them or if any cards work on them.

That's not to say it's bad. Like I said, I did enjoy it. I just don't think it has 'replay value' for me while the things I mentioned above are still true. I do really love certain 'rogue' games, but typically the ones where I don't feel completely clueless and there's a sense of actual progression, or what you achieve in one run has certain benefits that carry over into the next, and you gradually progress. 'Rogue-lite', I've heard that called. I know that's probably not what you're going for, but I thought I'd add this just to make a point that I do enjoy 'rogue' games.

Hey, thank you for playing our little game!

Overall I understand completely where you're coming from. My problem with making the game easier is that it would make it extremely short (it has only 3 levels), and it actually was meant as a more "hardcore" retro-like challenge. That being said, I actually expected that people would make their own notes (to help with memory), and/or write in the comments what they think/know what certain cards can do.

By the way, the room effects not telling you what they are is actually a bug which I got told about only today. They should have real names like all the other cards: "Trap", "Low Ceiling", "Fountain", "Sewers". I will fix this soon.

Difficult and unforgiving this rogue like card game will throw you into the dark depths of a dungeon; leaving you with nothing but your fists and wits to outsmart ghoulish beasts and deadly traps.

I absoulutely adore the rogue-like genre as this is one of the truest representations of classic 'Rogue' in it's difficulty and lack of tutorialisation. This game is most definitely not for the faint of heart or easily turnt around. I got very lost indeed! X3

The scrolls are magic spells, and have - depending on the runes - different effects. But usually they need a context. For example, there's a spell to hurt all monsters, but it only actually works if there is a monster. Other spells you can/must drag on other cards...

Cool game, it's like the Darkest Dungeon with cards.
But I had some things which got me a few problems. One thing was that I often forgot in wich room I was two rooms before and so I lost often food and health just by walking again in the same rooms I was before. It reduced a bit the feeling of progress. (but I was also bad in the game Memory)
And I couldn't really figuring out what one of these scrolls does. Some of them do something and other do nothing. And if they do something, I had forgotten which sign it had because I often clicked just randomly around of the scroll cards and sometimes I deleted the scrolls because of my vague knowledge about their abilities. (sorry)
The last thing I had was a bug in one of the rooms. I don't know what I've done to produce this bug. Down there is the room where it happened.  I was able to hover over the cards to see their informations but I wasn't able anymore to drag and drop them. (that was at my third run)
Anyway, it's a really addictive game to me. I also got in my second run to the second level! (and of course, died xD ) 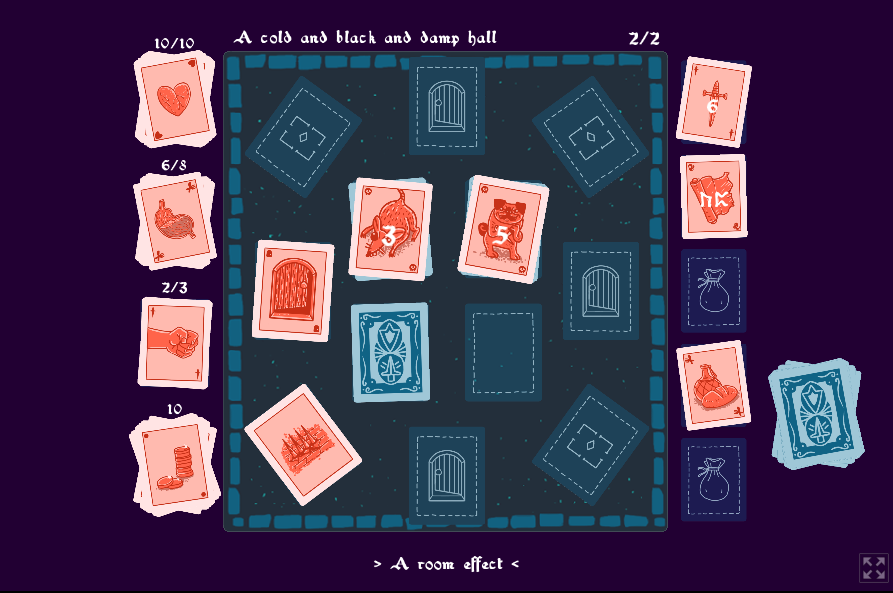 Hey, thank you very much for playing - and for the feedback! I guess we should encourage people more to make notes (e.g. on paper) for the game - like scribbling down the map, and what each potion and scroll does (if you find out). ;) The game is pretty short in general, so we wanted to enforce some kind of exploration.
Regarding the bug - interesting, never had that before. (The situation on the screenshot doesn't look unusual either.) If you or anybody encounter this again, maybe try to open the developer tools of your browser and look if there's some message in the console. If yes, I'd be happy to have a look at the error message.

One thing was that I often forgot in wich room I was two rooms before and so I lost often food and health just by walking again in the same rooms I was before.

I suppose it would be helpful to write oneself a map. Beyond that, spells could require similar treatment, as I have not seen any descriptions for them, besides the very nominal runes.